First of all, our group didn't have a clear idea what to build so we just use the sticks to build something that is mainly made up with triangles.

We eventually built a thing shaped like a tiara, with one square and some triangles (since structures of triangle are very firm).

When we try to move it we found this structure is movable and able to be transformed into different shapes, kinda like paper fortune teller. It's very firm but easily changeable, so we started to test it not only a structure on the ground but more like a wearable piece. Since four of its angles were totally symmetrical, we saw it as a pair of wings and put it on immediately.

It could easily fit human body and was still changeable except that you couldn't raise up your chin for there was another one right behind your head.

When you move it as one pair of wings, you can clear see the process of the structure transforming but still fitting the body.

We videos it that we put it on and flapped it like a bird.

[ see our video in moving page ]

After trying it on the several body parts, we considered doing the same thing on the whole body. So I wore it like chains around your body and prevented you from making some poses.

So basically, it's a protection and restriction at the same time. I always love such comparison and contradiction on human body.

You could clearly feel it when standing with it on, not to mention standing up wearing it. The best position with it was to sit down, in which way, you would strongly feel you were somehow trapped or locked, which made you feel a little bit helpless and awkward for that lots of people noticed and maybe laughed at you, you are the funny clown and the target.

When you started moving with your legs and your hands in the same position, the feelings became stronger. 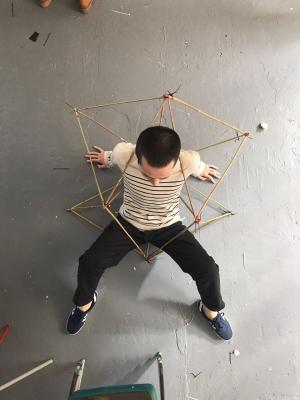 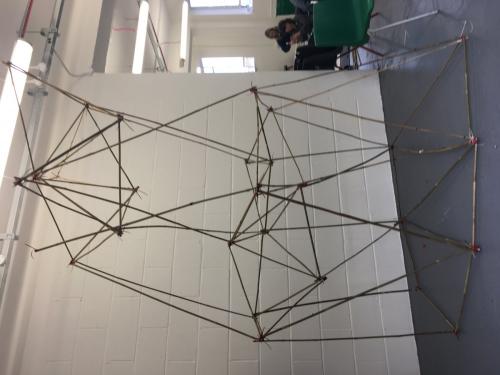 About the final outcome, our two groups connect our structures together and try to add more sticks to make it stand up and most importantly, build up a space like a dome or a little shelter.

We use the other group's structure as the base and ours as the ceiling.

The main problem is the center of gravity kept changing and the whole structure is not stable at all for that some new parts we made is square so those sticks were movable. So we all helped to add sticks into the existing structures to fasten it.

The final piece was nothing like we imagined but it looked good especially under the lights when the whole structure cast a complex shadow onto the ground.